As a segway from my post about my book on art, here is an introduction I recently wrote for the cosmology chapter in The Search for Hydrino Energy.


In the summer of 2002, I lay on a beach at dawn. The golden sunrise electrified the air, glazing the sand and the tan of my own skin; I felt lost in it. After a swim I trecked back up through narrow streets, passing a wall of stone, and then another, as the pavement became cobble stones beneath my feet, and I entered the heart of the Old Town of Rhodes, once a Medieval fortress. On an overlooked side alley, projecting a little over the road, was a small two-story studio.

It looked over the old town with a view that captured the gentle sweep of the landscape. On this morning, as others, the many colors and textures of Greece began to awake, with a light that has inspired artists for a millenia.

The interior of the studio was still twilight. The floor and stucco walls were textured and imperfect like a Rembrandt painting, and on them hung large canvases, from which of light and color emanated even at this early hour, their forms discernable in the morning light. Among the works of my friend and host, was the painting God Releasing Stars into the Universe.

The idea had emerged from a series of charcoal studies engaged to express feelings of loss and mourning. Charcoal is a sensuous medium that gave poetic expression to the inner being of the subjects, with a light that lifted from their hands and caressed their skin; a light of healing. In one study, the figure was on his knees, arms up, with peaceful waves radiating from his hands and open mouth in an act of ultimate release.

And from the work came the premise for the monumental nude, in which the river of light emanating from the man becomes an explosion of color and texture with depths that carry the eye, and looking into it you can believe that all of this, the nebulae, the stars, the galaxies, their sweeping arms of gas and dust tying them into the luminescent fabric of the world, could have come from an overwhelming act of love and intense desire; a need to fill the void. 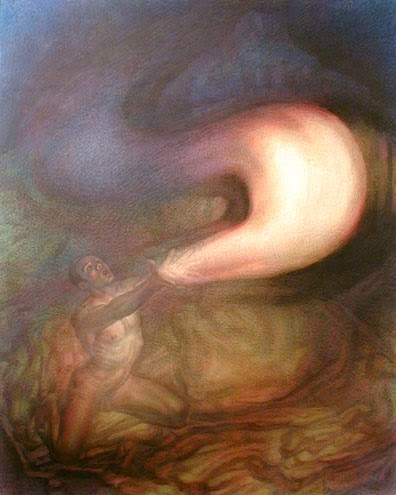 Just as with the charcoal, the light from the man becomes an energy of creativity being released; a powerful expression of self that turns loss into renewal, that consumes death and gives life. Michael Newberry was exploring not a biblical theme, nor even a mythological one, but a human one, perhaps that which gave rise to the mythology, the feelings that inspired the first wanderer who spoke of the creation, of the beginning, and imagined it as hollow emptiness shook by a breath of life that renewed all in its wake.
Perhaps the world was born this way; perhaps it was not a benevolent force but purely the physics of the world, expanding like a tidal wave, leaving the fertile motes that shaped themselves, over thirteen billion years, into all of this. It is a beautiful idea, and not only for the sake of beauty is it believed. But in this chapter we will explore an alternative that has its own beauty; not a violent creation but the calm of a breath that draws in and signs out, the foam of the Aegean washing over the shore of an unending time. I speak of the oscillating universe.

On the scale of the cosmos, gravitation rules. Yet gravity is owned not by stars or planets, nor even the grains that compose them, but the subatomic particles that compose the atoms of the grain. And here is where mystery lurks. How does a particle produce gravity? How does gravity act on a quantum scale?

Gravitation has never been understood in quantum mechanics, and the depth of our ignorance was made clear when we discovered that gravity does not rule the heavens unchallenged, that there is another phenomena combating it. And only where there are two forces can oscillation exist.

The ferries, busses, and coffee shops of Seattle, Washington are host to Brett's efforts to complete his first book, and begin a second. He may be reached at brett.holverstott@gmail.com.